Is No Office the New Office?

Remote working, or telecommuting, is far from a new concept. Freelancers in particular have taken advantage of the opportunity to avoid the corporate office landscape and to chose where they want to work and when they want to work.

The growing trend however is that remote working is not just for the freelancers. It’s steadily becoming an option to any employee with access to the Internet. As a result, the traditional 9 to 5, 40 hour work week is increasingly fading into the past, with remote working slowly, but surely, taking its place. From 2005 to 2012 we saw an 80 percent increase in the remote workforce and a 26 percent increase in remote job postings from 2013 to 2014.

More recently we have seen companies implement remote working to the extent that having a physical office is no longer a necessity. Automattic, the tech company that owns WordPress.com, has always offered their employees the option to remote work; in fact they give employees who want to use commercial coworking spaces a $250 stipend each month, or for those who would rather work at their local Starbucks, the company pays for their coffee. As a result, CEO Matt Mullenweg made the decision earlier this year to close their 15,000 sq. ft. office in San Francisco because no one was using it.

And it’s no wonder why; it’s a win-win situation for both sides. Employees choose where they want to work and when (to an extent) and employers have a wider access to hire the best talent whilst saving costs on facilities. Global Analytics Workplace estimates that by fully embracing remote working, employers can save an average of $10,000 per employee per year on real estate.

However, as with anything new, remote working is met with a certain level of apprehension that still keeps it as a perk rather than a norm. By not having all team members physically present in the same office, managers fear that it will be difficult to create a team environment. Companies also remain disconcerted on the concept because they fear employees will be distracted and meetings won’t be as productive.

The myth that employees don’t do their work when unsupervised is simply that, a myth. The reality is just the opposite. Various interactions and interruptions at the office, that we can call office phenomena, have been proven to cut productivity by 40 percent. So to counteract this, managers should look for ways that allow their employees to reach their maximum productivity, with 86 percent saying working alone is the answer. Thus, by providing remote working as an option, managers and employees can reach a mutually beneficial solution. 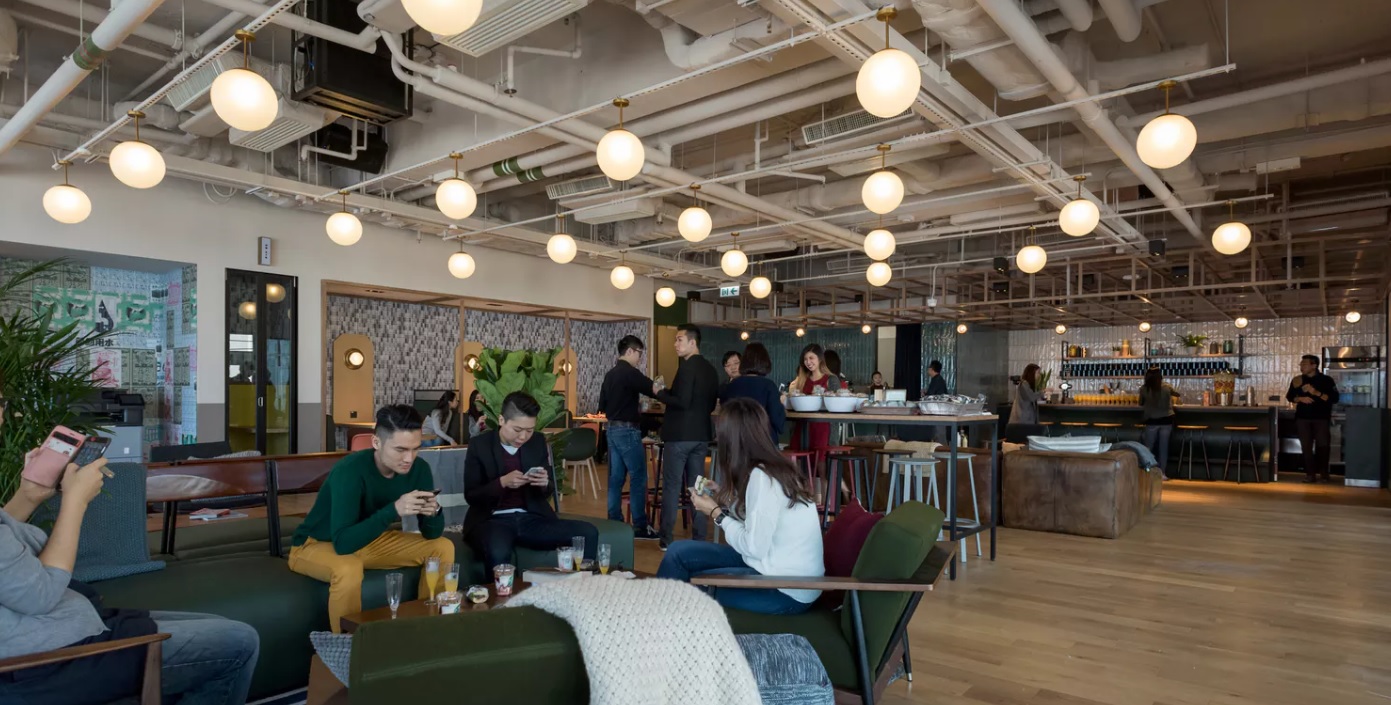 Access to coworking spaces is one way to provide remote workers with the right working environment. Even though these spaces are typically seen as distracting and loud, there are a variety of coworking spaces that are designed to cater to different needs. In fact, a survey conducted by DeskMag shows that 62% of participants report their standard of work improved, 71% said their creativity increased, and nearly 90% say they got a self-confidence boost by being in these spaces. So in the right space, remote workers can increase their productivity.

To ease the process, employers can purchase packages that give their employees access to a variety of coworking spaces in different areas. One example is FlySpaces’ Passport, which acts as a membership program, giving users and corporations access to the top coworking spaces around the Metro. This provides them the flexibility to switch up the environment telecommuters work in.

Productivity can also be increased by focusing on improving employee engagement. As employees feel more connected to the team, and to the company as a whole, they’ll want to put in extra effort to accomplish their goals. It’s human nature; when you care about something, you want to see it succeed. Contrary to what managers may believe, a study actually found that 61 percent of teleworkers are more engaged than their counterparts in traditional offices.

In addition to this, even though employees gain a certain degree of flexibility, in relation to where and when they work, their days are still dictated by what happens at the head office. Everyone has deadlines that they have to meet to ensure business runs smoothly. In other words, remote workers work when everyone else does.

However if managers want to keep track of what employees are accomplishing, there is an endless amount of tech apps and software they can utilize. Advances in virtual reality is also providing an new and exciting avenue that remote working can take. Let’s use Facebook Spaces as an example. This platform can allow employees to virtually meet each other and feel as if they are physically together even though one might in reality be in their bedroom and another in a park. However, this is still in the (near) future, so for the managers of today, Skype can be a very helpful tool.

Skype solves the issue managers have with setting meetings with their remote employees, namely that they aren’t as efficient. With body language making up 80 percent of communication, having a meeting over video chat allows everyone to see each other and to gauge each other’s reactions. These meetings can actually be more productive since people are conscious about the varying time zones that make them relatively difficult to reschedule.

The other preconceived notion is that one must be extremely tech savvy in order to make remote working successful. However, if you’re already a user of Facebook or Instagram, then utilizing other apps to manage a remote team will be a breeze as they're fairly intuitive. For instance, before joining FlySpaces, I had never even heard of Slack, but in less than a day I had the app figured out and downloaded on my phone and my laptop. The trick is finding which apps work for your specific team’s needs.

So when your team is scattered across the globe, how do you create a team environment?

Just because employees aren’t physically together all of the time does not mean that creating a team environment is impossible. There’s a lot to be said about face-to-face interactions and water cooler chats, but these aren’t the only ways to bond between coworkers.

The basic goal here is to create engaged and happy employees. This will help develop a strong attachment to fellow team members, regardless of whether they are sitting next to them in an office or sitting on their living room couch.

Establishing this team feeling has to start at the beginning. When hiring remote workers, it’s important to spend time with them as you would with any new employee. By simply making sure that they know what is expected of them and who they can ask for help, such actions ensure those working remotely to feel connected to the rest of the team.

This also means introducing them to various apps that your team may use to stay in contact. For example, we at FlySpaces are big fans of the chat app Slack. With team members based all over Southeast Asia, we’ve always placed importance on establishing a team environment. We set weekly team calls in which all team members participate to make sure everyone is aligned and that everyone is involved in the decision-making processes.

Employee happiness can also be increased by simply allowing them to spend more time with their family. For instance, in the Philippines, where family is highly valued, recent legislation has been passed to encourage work-from-home programs. Even though traffic congestion within Metro Manila has been a major push factor for this legislation, the added bonus is that it will provide Filipinos more time with their loved ones. The corresponding outcome is more productive employees.

Elastic, a software company with over 500 employees in 35 countries, acts as an example of how a company has successfully built a common culture amongst its employees. Twice a year the company will fly out employees to either the US or to Europe, just as a traditional company might hold a monthly team lunch, so coworkers can build meaningful relationships with one another. This may seem like an expensive feat, and it is. But for a company with no physical headquarters, there is a significant amount of “free” capital that they can spend on team bonding, which in the long-run will produce more fruitful outcomes.

Yet even with the increased adoption of remote working, we are seeing companies such as Yahoo and IBM cancel their telecommuting arrangements claiming that remote work is at odds with innovation. It’s not news that companies place a lot of value on innovation; however the misunderstanding here is with remote working, namely that it’s an either / or scenario.

The reality is that it’s not an all or nothing agreement. Majority of remote workers only work out of the office once or twice a week. A Microsoft Asia Workplace 2020 Study involving 312 working professionals in the Philippines found that 8 out of 10 participants spend only one workday out of the office. The secret for companies who want to integrate teleworking arrangements whilst promoting innovation is to find their unique balance. Just as employees find a work-life balance, employers must find an innovation-telecommuting balance relative to each employee: a legal clerk would need to be in the office more often than a social media manager for example.

Once this balance is struck, we can predict that it will allow employees to interact with one another for valuable brainstorming sessions whilst also giving them time once or twice a week in a space of their choosing to buckle down and focus on their work.

In essence remote working is not about continuously following up with employees about getting work done, rather it’s about creating an environment in which they want to get their work done.

As advances in technology continue, the modern workplace will increasingly become a digital one. The trick is to utilize available resources in order to create a coherent team environment and to establish strong lines of communication, both work and non-work related, to counter the fact that employees aren’t physically in the same space together. So despite the various challenges that remote working poses, it will soon become the norm for how people work, especially with the increased numbers of millennials entering the workforce demanding for flexibility.

Want to know if you’re ready to try remote working? All it takes is a change in mindset and good communication to ensure employees know what is expected of them and to avoid anyone taking advantage of not being in the office. But once done it can generate happier, more engaged, and more productive employees.